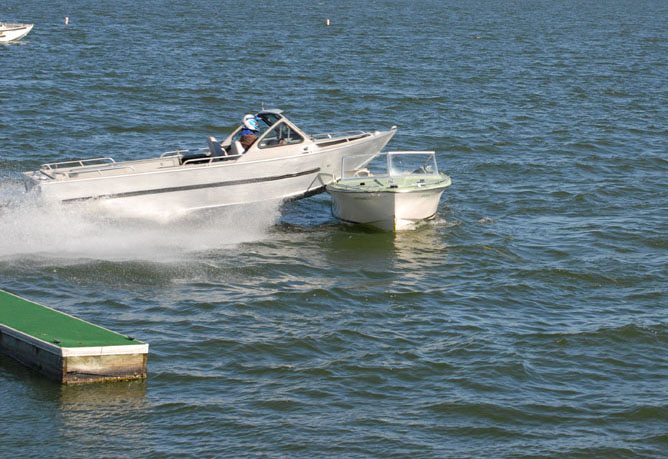 Some of this page contains excerpts from a study released in 1997 by the National Recreational Boating Needs Assessment Survey published in the November 1997 issue of Boat/U. S. magazine, U. S. Coast Guard Boating Statistics, NASBLA Reference Guide to State Boating Laws (Fourth Edition), from a 2002 study by the National Transportation Safety Board,from the National Marine Manufacturers Association,and from various other sources including newspapers and magazines. Some of the facts are several years old, but are retained for comparison purposes or because no up-to-date information is available.

80% of fatalities in 2003 occurred on boats where the operator had not completed a boating safety course.

The most reported type of accident in 2003 was a collision with another vessel.

Capsizing and falls overboard account for most boating fatalities (57%).

In 2003, 42% of boats involved in reported accidents were open motorboats.

Personal watercraft were involved in 27% of all reported accidents in 2003. But reported injuries continue a downward trend and have decreased every year since 1996.

More than half of all the people in the U. S. live within 50 miles of a coastline.

Michigan has the highest number of registered recreational boaters in the U. S., followed by California and Minnesota.

Runabouts and jon boats comprise about 60% of all recreational watercraft.

Personal watercraft account for only 2% of all owned boats.

Personal watercraft account for about 30% of all boating accidents.

Safety instruction for renting personal watercraft is mandatory in 28 states.

Most PWC operators who drown were not wearing PFD’s, even though PFD’s are required to be worn by operators of PWC’s in nearly every state.

85% of all recreational boating accidents are attributable to operator error (excessive speed, inattention, failure to follow nav rules and practices, use of, alcohol, lack of knowledge about the boat or boating environment, etc.).

Spending on boating by households of motorboat operators was projected to be $332 billion per year based on the survey.

Only 22% of boaters have taken a boating safety class.

Less than 20% of recreational boat operators involved in fatal boating accidents had taken some type of boating education course.

As of January 1998, 20 states have some form of mandatory boater education requirement.

As of June 2002, 39 states have adopted regulations mandating PFD’s for children.

The amount of time spent boating was 17.2 days, with the average outing 5.2 hours.

Alcohol usage tops the list of issues of most concern to boaters (28%), and careless or reckless operation (24%).

Nearly 15% of boaters report they now carry an inflatible vest, and would wear it should an emergency arise. (“Well, honey, here we, nearly unconscious and mangled from just having been flung overboard by that drunk that rammed us. Now hand me that inflatible PFD, would you?”)

Only 31 states have a policy requiring officers to use a PFD when on the water.

EDITORIAL COMMENT:Commander Bob seriously doubts that 35% of boaters wear life jackets on the water at all times, and further doubts that 41% of boaters make their passengers wear a life jacket, as stated in the previous survey result. But remember, the survey only states they “say” they do.

The National Sporting Goods Association says that Recreational Boating is the tenth most popular activity among those age 7 and over. Walking is first.