A Case for Mandatory Boater Education 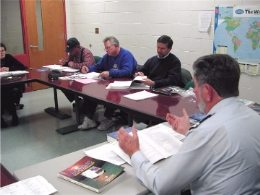 Recreational boating is one of the most popular and growing family leisure time activities in this country. It can also be one of the most dangerous family activities. In New York State all it takes is the desire and the expendable income to become a boater. A lot of new boaters are equipped with little more than the desire to be boaters. More than half of the states have recognized the inherent danger to untrained and unqualified boat operators. Those states have enacted legislation for mandatory boater safety education as a requirement for boat operators. New York State has only taken a half measure by requiring mandatory education for personal watercraft (PWC) operators and youngsters between the ages of 10 and 18. There is no requirement for boater safety education for the rest of the boating population. Our neighboring states in the Tri-State region, Connecticut and New Jersey have enacted legislation for mandatory boater safety education.

The United States Coast Guard Office of Boating Safety publishes an annual report containing statistics on recreational boating accidents and fatalities. The current report is for calendar year 2000 and is available for downloading from the Internet at http://www.uscgboating.org/stats.htm. The report is entitled Boating Statistics – 2000, Comdtpub P16754.14. The reports for calendar years 2001 and 2002 are still being collected and analyzed. That data will be presented in future reports. The 2000 report is the source for most of the statistics quoted in this article. The common thread in those statistics is that in states where boated education is required, the accident and fatality rate is markedly lower than in those states that have no training requirements.

New York State ranks 7th in the nation as a recreational boating state, having 525,436 registered boats in 2000. However, New York State ranked 4th in the nation with total accidents behind Arizona, California and Florida. Those states also have a longer overall boating season giving them greater exposure to the possibility of accidents. None of the leading four states in total accidents had a requirement for mandatory boater safety education in place during 2000. Arizona and California still have no requirements, while Florida has enacted a requirement effective October 1, 2001 that all boaters under the age of 21 must have proof of boater safety education. As indicated before, New York only requires that boat operators from age 10 to 18 and PWC operators have proof of boater education while operating a boat. In 2000, 17 New York boaters died in boating accidents. In Arizona, 12 people lost their lives, in California 49 boaters were lost and Florida lost 46 boaters. New York State ranked 12th in the nation in boating fatalities only because of our shorter boating season. Preliminary reports published by the National Association of State Boating Law Administrators (NASBLA) indicates that in calendar year 2001 the number of boating related fatalities fell below 700 with 695 deaths reported by individual states. The bad news is that New York State reported an increase in boater fatalities to 25 during 2001. The number of registered boats increased in 2001 by 2,677 to a total of 528,113. The number of boats did not increase sufficiently to justify the increase in boating fatalities. This trend clearly demonstrates the need for mandatory boater safety education in New York State.

Some national statistics at a glance, the greatest number of boating accidents is collisions with other vessels. In 2000 the national experience was 2,706 boat to boat collisions causing 67 fatalities. This next highest statistic is collision with a fixed object at 851 collisions that brought about 42 fatalities. Overall, the most dangerous type of accident is capsizing. The base number of reported capsized vessels in 2000 is 502. However the death rate in those capsizings is 205. During 2000 610 boaters fell overboard with an astounding 213 of them perishing. In New York 9 people drowned due to boating accidents and 127 people suffered injuries from boating accidents. These statistics clearly illustrate that once you wind up in the water your chances of survival are severely diminished. In all this gloom and doom there is a bright side. In 2000, both the number of reported recreational boating accidents and related fatalities were the lowest in nearly 10 years.

The Coast Guard collected information about the operators involved in the reported accidents during 2000. Contrary to widely held opinion that kids driving boats are the most dangerous operators, it is the people in the 36 to 55 age group that recorded the highest number of accidents and also the highest number of fatalities. The death to accident ratio in that age group was 7.3%. Young people in the 12 to 18 year old group experienced accidents, however their fatality rate was lower at 3.8%. The most frightening statistic was that the group over 55 years of age were involved in 1,060 accidents, but suffered 129 fatalities resulting in a 12.2% fatality rate, by far the highest mortality rate. When the local media reports a boating accident or a boating incident involving deadly injuries or drowning, they almost always characterize the people involved as experienced boaters. Scratch the surface a little, and you will probable find that even though those people spent considerable time on the water, they never had boater safety education or training. That simple factor clearly indicates that had they attended boater safety education or training they may not have been lost. In 2000, 84% of the boat operators involved in fatal accidents did not have any type of boater safety training. Just the sheer numbers should be a giveaway to anyone looking at that statistic that boater education will save lives.

The Coast Guard also did an analysis of the use of life jackets. In the overwhelming number of fatal cases, the victims were not wearing life jackets. In about half of the incidents reported, the vessel was equipped with approved life jackets and they were accessible. They just were not worn. Look at the fact circumstances in recent boating fatalities in our area. Every person lost at sea in a boating incident was found not wearing a life jacket when the recovery was made. What does that tell you? Right, life jackets must be worn in order for them to save lives.

I started asking questions why New York State does not require all boaters to have boating safety education. I was told that there is a lobby against this by the states marine dealers. I was told that there was little interest on the part of the public in boater safety education. I was told that there wasn’t enough funding to enforce a law like this. Naturally, I spoke with recreational boat dealers and I have yet to find one dealer that was not in favor of mandatory boater safety education. One sales person told me that he did not want to see a picture in Newsday or video on a news broadcast that clearly showed one of his boats damaged after an accident or sunk. He felt that this would be bad for business. I teach boating safety for the U. S. Coast Guard Auxiliary. In every class that I have taught I have asked if anyone would object to legislation that would make boater safety education mandatory for boat operators. I have never received a negative response. I have talked to some people who told me that they have been boating for years, never took a course, but they know all there is to know. I conversationally ask them a couple of safety-related questions and find they can’t answer the questions correctly. But, when they have a problem or get into trouble, the news media will report that they are experienced boaters. I feel safer when I share the water with a 12 year old youngster on a PWC, who has taken a boating safety course than I do with a know it all senior citizen who has been doing everything his way for years and brags that he never needed a boating course.

We can make a change. I am asking readers to contact your New York State Assembly representative and your New York State Senator to ask them to either introduce, sponsor or support legislation to make boater safety education mandatory. Don’t ask for licensing, just mandatory education and training to reduce the carnage on our waters.

NOTE: Captain Pete Seidel holds a U.S. Coast Guard captain’s license and is a member of the U.S. Coast Guard Auxiliary. Captain Seidel invites you to write to him at kpeteseidel@aol.com with questions or comments regarding this issue.