The artist responsible for the famous painting”Arrangement in Gray and Black No. 1: Portrait of the Artist’s Mother” (commonly known by another title), learned the technique of etching through his work with the U. S. Coast and Geodetic Survey. What was his name, and what was his job with the USC&GS;? 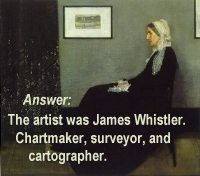 What is the term used to describe ‘speed estimated by dividing the distance between the last fix and an EP by the time between the fix and the EP’.

Rudders are classified using three different terms. What terms apply to rudders A, B, and C in the following illustration?

This term describes rocks or shoals marked on a chart, usually by a ship’s master, but whose actual existence has not yet been proven by a hydrographic survey.

If the famous owner of ‘Wild Goose’ could have placed a VHF radio call to the well-known owner of ‘Tinef’, who would have been calling who?

Answer: John Wayne would have been calling Albert Einstein.

The American Ephermeris and Nautical Almanac last tabulated lunar distances in what year?

In the Mediterranean Middle Ages, points of the compass were identified by names of winds. What was the wind name for North?

What nation recognizes its rich maritime history, heritage, and traditions with this lighthouse currency?