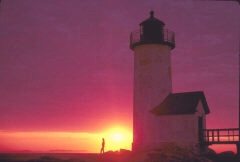 Since the time of the Roman Empire, lighthouses have been the saving grace of seafarers around the globe. They have been the objects of imagination for land visitors and artists throughout the centuries, and probably have been the most photographed structures known to man. Books and pictorials abound with the lore and romance of these architectural behemoths, and millions of mantles, knickknack shelves, and curio cabinets display miniature renditions of them.

In the daytime, under good conditions, the shapes of lighthouses and the patterns of checks or stripes painted on their walls are unique, and can identify one lighthouse over any other. At night, or under other conditions of limited visibility, the signal of the light itself becomes its unique characteristic?flashing, blinking, longs and shorts?setting this light apart from any other. To identify the lighthouses, a mariner refers to a ?light list?, which describes the day and night characteristics of any given lighthouse. It?s interesting to note that along the coastlines where seasonal snows are prevalent, black and white stripes or checks are seldom used, since they can easily blend in to a drifted, snowy background. Lighthouses in those areas are usually painted red and white, where lighthouses on our southern shores will normally be black and white patterned. One of the most recognizable of these is the ?Cape Hatteras? lighthouse, which has wide black and white stripes which spiral down the length of the structure.

Most of the early lighthouses, with lamps lit by kerosene and whale oil, still dot the rugged and rocky coastlines of the seas of the world. Most have been long converted to electrically powered mechanisms with sophisticated lenses, and some with radio transmitters and radar. Very few are still home to a human live-in caretaker. But many believe that the spirits of those early ?keepers-of-the-flame? remain vigilant at their posts to warn mariners of impending peril.

Often, even the names of the lights betray their historical significance. ?Execution Rock?, for example, is said to have been constructed atop a structure which housed prisoners of the Revolution. The prisoners would be chained in a pit ,which was below the level of the sea at high tide. When the tide would rise, they would drown. Word of this barbaric activity circulated quickly, and news of the execution chamber may have even helped hasten the end of the war.

Other lighthouse names just have a very high ?quaint quotient?. Nubble Light, Big Sable, Tybee Island, Owl?s Head, Cape Flattery, and Spectacle Reef seem to have been named just to get us to drive out of our way on vacation to visit them. But the lighthouse that wins my award for the most interesting, historical, and celebrated is New York City?s ?Little Red Lighthouse?. The light?s real name is Jeffrey?s Hook. It has been the object of a poem (?Ode to Little Red? by John R. Biasco), a children?s book (?The Little Red Lighthouse and the Great Grey Bridge?, by Hildegarde Swift), and an activist campaign (thousands of schoolchildren saved its destruction). And it?s worth reading about through your favorite search engine.

There are also still a few remaining floating lighthouses, called ?Light Ships?, although most have been replaced. The ?Ambrose Light? which is one of the sentinels for New York Harbor, sits on four legs resting on bedrock 75 feet below the surface, seven miles off the coast of New Jersey. It was built in 1967, and replaced a Light Ship by the same name, which had been anchored on station there since 1823. In 1996, the Ambrose Light was struck by a 745 foot Greek ship in clear weather, causing the structure to be three-legged instead of four-legged. It may have been one of the only times that a ?lighthouse? has been struck by a passing ship.

What is it that attracts us to lighthouses? I?ve come to the conclusion that its part of our nature. Lighthouses represent security, safety, and beauty to most of us. I don?t live very near a lighthouse, but I?m envious of anyone who does.

A few years ago, my wife and I were offered an opportunity to live in a lighthouse for a few weeks, and I don?t remember being as excited about any vacation I?ve ever taken. Unfortunately, the plans fell through in the days leading up to our departure. I think the thing that disappointed me most was that I wouldn?t have my chance to be counted among those that ?kept the light?, even if only for a short time.

Many communities are being asked to ?adopt? lighthouses in their areas these days, owing to the lack of funding for the Coast Guard to properly maintain these sentinels. If you live in or near a community where that issue arises, I hope you?ll support the effort. We need to keep the lights in these magnificent and historic structures burning brightly. It?s in our nature.