See a Spout, Watch Out 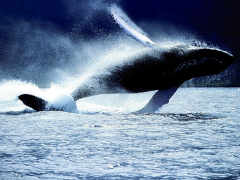 I have been a whale “fan” every since I was a small boy. I don’t remember what got me started, growing up in the midwest where whales weren’t exactly plentiful. It probably was because of a movie I’d seen, or a book I’d read. Or it could have been the whale stamp collection I was given, showing illustrations of all types of whales from all over the world. So I’ve always been fascinated with whales, and have grown particularly fond of humpbacks.

In my pre-retirement life as a corporate executive, the walls of my office were adorned with portraits of breeching humpbacks, and cows with their calves, and the tops of my office furniture had humpback figurines displayed for anyone interested. (I found that the people that reported to me were VERY interested in my collection, and those to whom I reported were not as impressed.) I still have my collection of Robert Lyn Nelson’s in my home office, and have followed the Maui predicament over breeding grounds and PWC’s, and belong to the Cousteau Society. I have been privileged to have taken whale watching cruises on several occasions in the Hawaiian Islands and on the east and west coasts of the U. S., and have indelible memories of humpbacks and gray whales surfacing and playing just yards from our boat. And I have always been cognizant of the risks to the whale population from varying activities of man, including whaling, and including whale watching tourist excursions.

In the summer of 1998, high-speed whale watch vessels in Massachusetts struck two whales, with one collision resulting in a fatality. As a result of these strikes, the Northeast Large Whale Implementation Team convened a Whale Watch Advisory Group (WWAG) consisting of members of the commercial whale watch industry, conservation groups, and representatives from NOAA Fisheries and the Stellwagen Bank National Marine Sanctuary. These meetings resulted in NOAA Fisheries issuing new whale watch guidelines as well as an Advanced Notice of Proposed Rule Making (ANPRM) to solicit comments regarding the need for whale watching regulations in lieu of simple guidelines.

Although informal whale watching procedures were created, no mechanism for public outreach was incorporated to educate private boaters. As a result, a multi-phase pilot program called “See A Spout, Watch Out” was developed as a cooperative outreach project of the International Wildlife Coalition (IWC) in Falmouth, MA and the Stellwagen Bank National Marine Sanctuary (SBNMS) in Scituate, MA. This program focuses on thousands of recreational vessels that visit Stellwagen Bank, a seasonal feeding area for at least seventeen different species of whales. Although whales are known to visit the Bank throughout the year, the majority of large whale sightings occur from April through November, resulting in substantial commercial and recreational whale watching activities.

“See A Spout, Watch Out”, specifically targets Massachusetts through hundreds of boater safety classes conducted by United States Coast Guard Auxiliary, Massachusetts Environmental Police, New England Maritime, and United States Power Squadron boater-safety instructors. Each instructor receives a packet that includes a brief educational slide show with script for incorporation in boater safety courses. Information provided in the packet includes: what and where the SBNMS is, why it is a fragile resource and an important seasonal feeding area for cetaceans, and four tips for proper boating behavior when in the vicinity of whales. Current estimates indicate that more than 5,000 safe boating course participants are likely to receive this information in 2001.

I applaud this effort, and hope that it gains ground in other areas where whales abound. In the meantime, if you’re one of the lucky ducks who gets to operate your boat in whale waters, keep these four tips in mind:

See a Spout, Watch Out! Slow down and post a lookout.
Head on is Wrong! A whale’s direction of travel may be taking it to an important food source. Don’t try and cut the whale off. Approach from the back or side, never from the front.
Lots of Boats, then Talk to Folks! Let others nearby know of your sighting by VHF radio in order to coordinate your viewing, and keep from boxing in, crowding, or stressing the whales.
Don’t You Get Close, Let the Whales Approach! Coming too close may cause the whale to reluctantly move away from its food source. Don’t chase them. You’ll have better viewing if you respect their space. Remember, a frightened whale will never approach your boat, a curious one may.

A more complete list of whale watch guidelines can be found at the NOAA Fisheries web page. And for more information about the “See a Spout, Watch Out” campaign, visit the International Wildlife Coalition.

Being a responsible boater covers a lot of ground, doesn’t it?