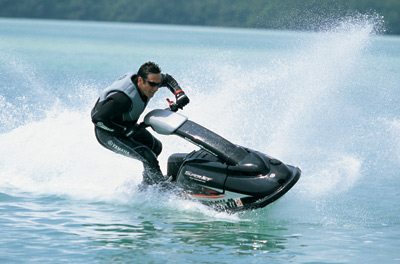 Since the day the Earth’s second boat was built, thus giving birth to the risk of collision, nothing has been more controversial or generated more regulation than has the jet-powered personal watercraft. Many government agencies and lake associations have banned them or threatened to do so. They’ve been the targets of blame for shoreline erosion and noise, and called a menace to waterfowl and other living things. I have been told by many marine patrol officers that personal watercraft represent the vast majority of the complaints they receive.

The irony, of course, is that PWC aren’t at all responsible for the anger and frustration expressed by boaters and waterfront property owners. Left to itself, the PWC would simply sit there, bobbing on the surface, fiberglass fading in the hot sun. The problem is the person who turns the key and thus assumes the responsibility of its operation.

It’s interesting to note that PWC clubs and associations, acting in defense of their position of PWC as safer, quieter and less environmentally destructive than ever, also seem to be lulled into defending the machine rather than the behavior of the operator. For example, studies have been done to show that the machines do not have an adverse affect on sea grass when they plane across the relatively shallow water habitat of that particular vegetation. Other studies tout the fact that resting waterfowl are no more disturbed when PWC approach than when any other type of vessel comes near. Another part of the same study found that bank erosion was equally affected by passing vessels of any kind, not just personal watercraft.

Frankly, just once, I’d like to see a study that shows why a PWC operator has to run his machine through a sea grass bed in the first place. Or one that shows why the PWC operator that jumped a wake and landed on the aft end of Gloria Estefan’s cruiser put his life and the lives of the people on that vessel in jeopardy. Of course (may his soul rest in peace), he’s no longer around to participate in such a study.

The point is, we need to stop blaming the boat and start focusing on the boater. We need to be reminded that all types of recreational vessels should be welcome to share our waterways, as long as they are under the control and supervision of responsible operators. That goes for powerboaters, canoeists, sailors, kayakers, yachtsmen and PWC’ers.

The PWC community needs to focus future studies on the answer to one very important question. Why do so many other boaters, as well as shoreline property owners, single out PWC operators as the object of their disdain, and generally see them as irresponsible? I can tell you that to most critics, it’s not because of the effect they have on sea grass or waterfowl.

We know that the average PWC operator is middle-aged, educated and affluent. This doesn’t seem to be the profile of “Wild Thing.” And yet, my personal observations are that many PWC operators display an “in-your-face” attitude, don’t know the rules or ignore them, and seem to relish the irritation they cause. I sometimes think they like the noise their machines make on the water, and operate them to maximize that noise. I’ve seen them taunt waterfowl, spray boats and jump wakes within several feet of the sterns of other boats. In general, I don’t see a lot of responsible PWC operators. To me, it’s no wonder that most of the complaints crossing the desk of marine law enforcement officers are connected to PWC operation. And neither is it mysterious to me why nearly 30 percent of all accidents are related to the operation of PWC’s, while they represent only about 6 percent of all registered vessels.

So let’s stop blaming those nifty little contraptions for all the ills wrought upon the boating community, and concentrate on improving the operators through education and enforcement.

Here are some things that PWC operators could start doing to change my perception about them, and I’ll bet yours, too:

And for the rest of us, think twice about blaming the PWC. In the right hands, they are a fun and exciting way to enjoy a day on the water. And if there’s a problem with the machine, it’s probably a loose nut holding the handlebars.