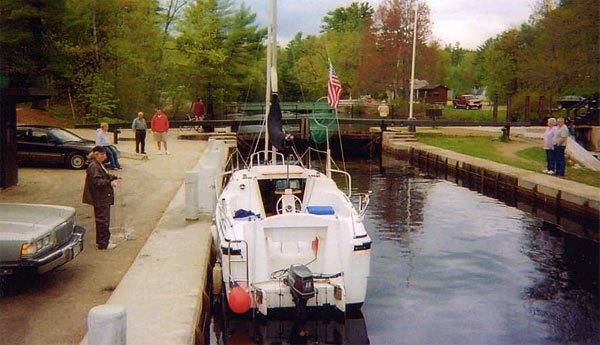 They say you’re never too old to learn something. I believe it. I thought I knew most everything about the behavior of boaters from many years of hanging out with them, listening to their tales and observing their love affairs with all things watery. But I now have concluded the thing that motivates boaters and drives them to the water’s edge is their primal need to “navigate.” I’m taking license to use the term “navigate” in a broader sense, to include what boaters might simply refer to as “traveling” or “going from point A to point B” — but something slightly more than just “truckin’ over to Barnacle Bay for a beer and a burger.”

Here’s the basis for my revelation.

Where I live, there are two sizeable inland lakes that dominate a recreational wonderland. These two major lakes are links in a chain of lakes, which stretches about 20 miles, not including the river that feeds the chain and the navigable tributaries below it. One of these major lakes happens to be, through a glacial practical joke, about six feet higher than its companion lake a mile and a quarter downstream. So, undoubtedly following a period of political head-scratching and bureaucratic beeswax, somebody decided it would be a neat idea to build a lock between the lakes. The Army Corps of Engineers and city and county fathers poured the concrete, and suddenly boats that had previously wore thin on only one side from a constant clockwise circling of these two sizeable lakes were liberated.

One recent Spring, Mother Nature dealt a cruel blow to this upper-Midwest boater’s paradise. Rains, which in normal volume would be a welcome compensation to a string of relatively mild, mini-snowfall winters, came in a string of deluges. Record flooding was so severe that emergency regulations were in place for most of the summer, including for many weeks, a complete no-wake restriction. And with that came the closing of the only passageway between the two major lakes the lock.

Well, the day finally came when the determination was made that the lakes had finally drained to an acceptable level, the emergency restrictions were lifted, and the lock was re-opened. With help from the local press, word spread like wildfire, and needing only enough time to top off the tanks, out came the “navigators.” Did they begin to circle the lake? No. Did they idle to the nearest bay to anchor in for lunch? No way. Did they head to a shallow, sandy-bottomed beach for a cooling dip? Nooooo.

They headed straight for the locks. I know. I was there, tending the lock, preparing for the onslaught that would predictably come. Like a German soldier, peering out of the slit in his Normandy bunker in “The Longest Day” to see the horizon covered by the U. S. Navy, there was I, looking out the window of the lock house and watching the gathering storm of pent-up boaters who had for too long been deprived of their innate desire to “navigate.” And it was the lock that would be their ticket to free themselves of the surly bonds of “their” lake. With the lock in operation, they could now travel again and go from one place to another and run from point A to point B and navigate.

As they passed through the lock, I’d inquire as to their motivation for leaving one major lake in favor of visiting our other major lake. After all, this was a golden opportunity to study the behavior of hundreds of boaters who had suffered “navigation deprivation” for two months out of a relatively short summer, even in the best of seasons. Given the choice between staying close to home or wandering freely from place to place, there was almost unanimous evidence that, often without knowing why, these boaters needed to put distance between home and “someplace else.”

So I can’t help but wonder. Did Chris Columbus really have “finding better trade routes” in mind when he asked Queen Isabella for a piece of the exploration budget, or did he wake up some Saturday morning sick to death of the prospect of another trip to Picnic Point? Was Magellan’s heart really into circumnavigating the earth, or had he just decided that there had to be more to life than just sailing around familiar Portuguese bays every weekend?

I guess we’ll never know for sure, but I’m fairly certain that one day every boater comes to the realization that the shores on his or her lake or sea are really restrictions that somehow need to be lifted. Then they’ll have to pass through the locks and see what awaits them. And they’ll leave not knowing what awaits them, except that surely, the algae must be greener on the other side.