Up the Lazy, Crazy River 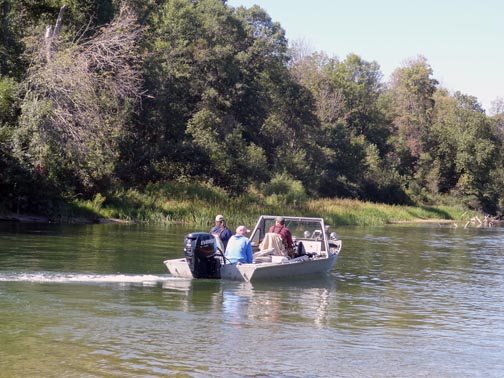 Those skippers who have piloted their crafts on both rivers and seas appreciate the special and exclusively unique knowledge and skills required for both. Sooner or later, most boaters find themselves lured to the beauty and challenges of a moving waterway, and try their hand at river boating. If you find yourself in that group, you would do well to keep in mind a few facts and tips about that sometimes not-so-lazy, sometimes crazy, river.

Rivers have people living near the banks. If you’re new to a boating area, local knowledge is without a doubt the best tool you can have in your river piloting toolbox. People who live along a river, local fishermen and marina owners all can be of great assistance to you along the way. Take advantage of them, not only for information on where the river may have silted in a bit last week and for places to camp, lodge, tie up and eat, but also for their folklore and stories. River people have lots of good stories to tell.

River depths fluctuate. You won’t find depths shown on your river charts, because rivers rise and fall with regularity. Heavy rain upstream will find its way down in varying degrees. On waterways controlled by dams and spillways, the water levels can be altered with a push of a button, or turn of a valve. This becomes important if you plan to spend a night with your boat pulled up on a sandbar. I’ve seen 50-foot houseboats nearly beached after an overnight downward “adjustment” of the river.

Before settling in for the night, make a VHF or cell phone call to the nearest dam operator just upstream from your position. They’ll let you know if they’re planning any changes in the river level where you are. If you’re on a river where there is no manmade level control, pay close attention to the weather upstream. If they’ve had many days of heavy rain, you can be fairly sure there’s going to be more water under your boat when you get up in the morning.

Rivers carry debris. Because rivers rise and fall, tree limbs, railroad ties, barrels which have broken loose from floating docks and other forms of debris are moved from place to place along the course of flow. When the river level drops, much of the debris collects along the shoreline or in shallow sloughs and backwaters. But when the water rises again, the debris floats out into the current and is carried downstream. So it’s important to remember rising water equals debris. Not always visible at the surface, a waterlogged, 10-inch diameter log can raise havoc with a fiberglass bottom, lower unit or drive shaft, so reduce your speed and stay vigilant when the river is rising.

With a strong current and the risk that your engine may decide to take the rest of the day off, you’ll be much better off keeping your distance from anything that has millions of gallons of water rushing over or around it.

Rivers flow. Although oceans have currents, as do some inland lakes that are part of river systems, river currents have somewhat more complex behavior. As a river rounds a bend, back currents develop on the inside curve, while the river endeavors to dig itself deeper into the outer reaches of the bend. The deepest part of the river usually is on this outside part, and conversely, silting generally occurs on the inside. Also, the speed and direction of a river current will vary with the depth of the water and shape of the bottom. A shallow draft boat will behave much differently running through the same part of a river as a boat with a deep draft. These differences will be most noticeable, unfortunately, when making maneuvers into a slip or to a gas dock where many people have gathered, at least in your imagination, to watch you display your boat-handling skills.

Many rivers contain fixed, man-made structures. On some, wing-dams or dikes have been built out from shore to help keep the current flowing down the navigable channel. These structures are made of rocks and stones to prevent them from floating away, and therefore they are unforgiving to any boater who may decide to shortcut across one of them. Some are in plain sight, some will show a telltale ripple on the surface of the water, but many are completely hidden. On navigable waterways, they’re marked on the charts, and it’s best to stay clear of them.

If you have to leave the channel to go ashore for any reason, try to leave the channel at a right angle to the course of the river, and go as slow as you can without yielding to the current. There are other solid, man-made structures on a river, like locks, dams, spillways and bridge abutments. Don’t go near any of them. With a strong current and the risk that your engine may decide to take the rest of the day off, you’ll be much better off keeping your distance from anything that has millions of gallons of water rushing over or around it.

Rivers and river boating can be delightful change of pace for the seacoast sailor. With a little preparation and common sense, the personality and character of a river can provide a boater with experiences and memories to last a lifetime. Give it a try. From one who grew up on the mightiest of all rivers, it’s not such a crazy idea.