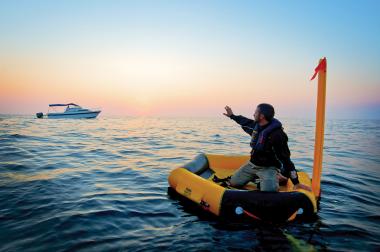 Let’s put 10 fictitious people in a life raft. We’ll say that they were enjoying a beautiful day sunning and listening to Jimmy Buffet CDs on a friend’s cruiser 35 to 40 miles offshore, when a disaster, let’s say a fire, caused them to abandon ship and take refuge in a 12-person raft. We’ll also say that the fire shorted out the electrical systems aboard the vessel before anyone could place a Mayday call.

So there they sit. Bobbing around in a relatively calm sea, miles from shore, knowing there are probably no potential rescuers on the way to their position. The way in which each of them reacts to this emergency is going to have a direct bearing on their chances of surviving it.

We can be fairly certain that one person on that raft is exceedingly calm. It’s estimated that 10 percent of those who have survived a period of time on a life raft in the open sea have remained calm through much of the experience. Calm is good. But like a thermostat that can be turned up too high, being too calm can be risky if turned up to the point of inaction or a reduction in reflex. Action and reflex can be important in an emergency.

Let’s guess that seven of the 10 are experiencing fear. Night will be falling soon. What happens if this thing springs a leak? Do we have enough food and water until we’re rescued, if we’re rescued? Fear, like calm, can be a desirable reaction. It can be a motivator, heighten your attention and quicken your reaction time. But, if the fear thermostat is turned up too high, it can turn into panic. And that’s the one of the worst things that could happen to this fictitious group of survivors we’ve created.

Panic doesn’t occur as often as one might think in emergencies such as the one we’ve concocted here. But when it does, it can be deadly. Within a short time, a panic-stricken person can infect everyone else involved. People in panic lose objectivity, reason and judgment, all those things that are essential in the struggle to survive such an emergency.

The other two people in the raft are running the gambit of emotions, and at any given time it’s difficult to tell exactly how they’re reacting to the situation. Initially they were stunned, nearly in shock. They were emotionally numb and bewildered. Later, they’d experience hyperactivity, doing a lot but accomplishing little. In some of these moods, they can unknowingly sabotage the chances of survival for all.

Anger will circulate through most of the residents of the raft before too many hours pass. There have been many accounts of fist fights breaking out on lifeboats after only 10 to 12 hours of being in such tight, wet, cold quarters. Anger is not an emotion that can tolerate much of an upward turn of the thermostat.

Given a long enough time out there, bobbing in that raft, you won’t be able to recognize the players by their emotions. The one that was calm will eventually take on a new demeanor, and so will they all experience the widest range of behaviors, given the time they will have to endure the calamity.

We won’t drag our scenario out into weeks of isolation, when suicides, delirium, hallucinations and other behaviors I don’t wish to write about here have been documented in the stories of survivors. Let’s say that after just 48 hours or so, our hapless raft passengers were rescued and returned to their mundane lives of day trading and web site publishing, and lived happily ever after.

My mantra is that, like most things in life, preparation is key to coping with many of the safety related issues that face recreational boaters. The trauma of fighting for your life in a raft is a perfect illustration of how preparation can influence behavior. Knowing what to expect is half the battle. If you know ahead of time that survival may someday depend on your will to right a life raft after it’s blown over for the fifth time, then you’ll be more likely to take it in stride when it happens instead of succumbing to panic. If your passengers have confidence in your preparation as Captain, won’t that put them more at ease in the event of a real emergency? If they know ahead of time that you have an EPIRB (Emergency Position Indicating Radio Beacon), flares, food, water, warm clothing, sun protection, and a desalinator on board the life raft, won’t that help ease the initial fear and shock that most would feel if an emergency occurred?

Here are some things to think about (prepare for) if you ever find yourself in a real emergency like the one we just made up.

1. Be positive and talk about how you’ll probably be rescued, not if you might. (Much easier to do if you’ve filed a Float Plan, switched on your EPIRB, or sent a Mayday, huh?)
2. Many survivors describe the part that prayer played in their ability to cope. Don’t overlook or underestimate it.

3. Don’t give in to your situation. Control it. Establish some routines and give everybody on board a job to do, even if it’s to come up with a good joke every 10 minutes. If you’re alone, establish routines and schedules. And don’t give up!

I hope that you’ll never have to use these tips. But if you do, your chances will be much better if you prepare for survival.