We’ve Got our PFD’s…Now What? 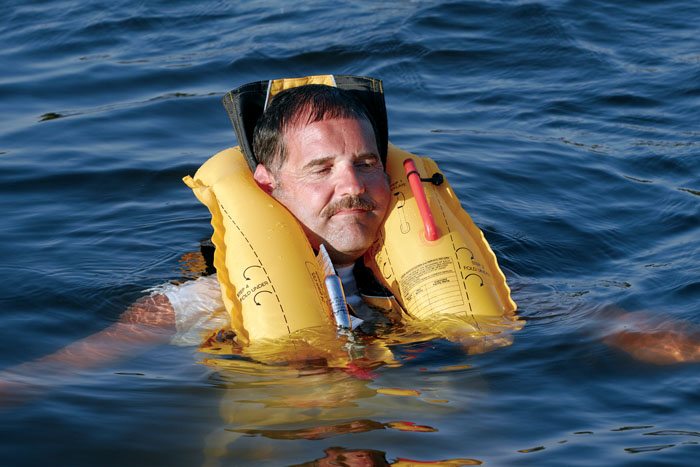 I have a personal theory that the need and use of personal flotation devices, or life jackets, was borne of two general evolutionary events in history. These two events largely are unrelated to each other, but until they occurred, human civilization apparently didn’t feel that such devices were important or necessary.

The first of the two events was the transition in the construction of seagoing vessels from wood to steel.

In days of yore and wooden ships, if a sailor went into the sea, it most likely was the result of shipwreck. Such a catastrophic occurrence could have been the result of ferocious storms, or from cannonballs launched from a few yards broadside by a pirate or ship of an enemy nation. It even has been written that sea monsters have shattered the hulls of seagoing vessels, and in fact we know that whales and other large sea creatures have created such havoc with ships over the ages. But whatever the cause of the wooden ship breaking up, she always left something of herself to which her sailors could cling. To those who may have given any thought in those days to strapping wooden slats around the bodies of their captains and crews, the idea must surely have been deemed unnecessary because of the life-saving flotsam that would accompany them into the sea. In a manner of speaking, one would have surmised, the sea will be filled with flotation devices in the event of a shipwreck, so why go to the trouble of carrying more flotation into the sea with you.

History records that it wasn’t until shipbuilders began turning their attention to more durable hulls made of steel that strangely awkward and odd-looking wooden, strap-on devices began appearing in shipboard lockers. When these ships went down, little would remain bobbing on the surface to support a sailor in distress. It was time now for the sailor to start carrying something that would float into the water with him.

The other historic transition that brought forth an interest in personal flotation devices was the public’s interest in recreational boating.

Other than some of the South Pacific islands, where children would paddle out into the surf and dive for decorative shells and turtles — not for profit, but for fun — there was very little interest in boating for recreation thoughout most of history. Vessels were seen as useful and necessary for exploration and commercial transportation of goods, but not much of the day was spent longing for an open-bow runabout in which the family could enjoy an outing on a placid sandbar or water-skiing. Driving past a large marina today, it taxes our imagination to recall that recreational boating is a relatively modern phenomena. But it is, and with it came a realization that most recreational boaters, unlike the Tahitian children that grew up alongside the sea and lived half their lives in it, were out of their element on the water. They demanded safety, especially for their children, and new industries were born sewing webbing around strips of kapok.

So, according to my own conclusions, out of large steel ships and a desire for family fun on the water came what we know today as personal flotation devices, or PFDs. Those were the catalysts that brought us first to wooden lathe held around a seaman’s torso by knotted fiber, and now to self-actuating Coast Guard approved type V “suspenders.” Since those two events awakened our need for PFDs, we’ve developed new technology, new materials and utilized our refined sense of ingenuity to produce devices that have the potential of saving many lives in our community of recreational boaters.

But there’s still one more important chapter to be written in the evolution of PFDs. What will historians write about us when we actually decide to wear these devices, now that we have them? Will they conclude it will be because of a manufacturing breakthrough where PFDs will be no more obtrusive than thin strings hanging around the wearer’s neck? (After all, we wouldn’t want a PFD to get in the way of a good tan, would we?) Or, will it be because of statistical drowning rates and subsequent government regulation? Will it be because of some catastrophe? We all hope not. Or is it possible that the boating public finally realizes that 600 or so tragedies each year can be averted by simply wearing one of these devices when they venture out onto the water?

Only time will tell.