If You’re Ever Under the Helo 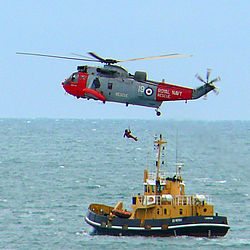 Boaters should be at least fundamentally acquainted with certain principles of helicopter rescue operations. With increased recreational cruising, and with the Coast Guard’s nationwide fleet of rescue helicopters, the chances of you and the Coast Guard meeting under rescue conditions is not as remote as you might like to think. If you’re boating on bigger water, and you or a passenger becomes ill, injured or otherwise in distress, the rescue vehicle of choice likely will be a helicopter.

If you’ve ever been beneath a hovering helicopter, you know how noisy, windy and unnerving it can be. There isn’t much you or the pilot can do about the noise and the downdraft. Unfortunately, both noise and wind are characteristics of helicopters. But there are some things you should know and do to prepare for such an experience. By being knowledgeable and properly prepared, you can reduce the stress associated with such an encounter. At the same time, you’ll minimize the chances of blunders that could put you and your passengers at further risk, and maximize the chances for success of the operation.

Before the helo arrives at your position, you need to make some preparations. Make sure your VHF Marine radio is tuned to channel 16 and the volume is turned up. Stow all loose items that might be blown about or sucked up by the helicopter’s turbine engine intakes. This can include lines, soda cans, charts, towels or any other light materials. Make sure all passengers are wearing their life jackets. Lower antenna masts, outriggers and anything else that could interfere with the operation. If you’re on a sailboat, all sails should be furled and secured. And finally, limit the number of people on deck. Select the few that can help, and move the others out of the way.

It is important for you, as captain of the surface vessel being assisted, to make certain that no lights or flares are aimed in the direction of the helicopter as it approaches your position. Blinding the pilot will not get the operation off to a good start!

The pilot may ask that you get your vessel underway, if possible, and run slowly into the wind or with the relative wind over your port bow. This way, the helicopter can maintain a heading well to the left of the boat’s heading, giving the pilot the best possible visibility. Also, with some “way on,” both the boat and the aircraft are more controllable and steady. Finally, the downdraft from the rotor blades will be pointed more aft, and away from the boat.

Spinning rotor blades on a helicopter act like an electric generator, and can develop thousands of volts of electrical energy. This energy can be transferred from the aircraft to a person on the vessel who touches the hoisting cable, resulting in an uncomfortable and occasionally dangerous shock. Therefore, it is recommended that the cable be hooked or touched first by a conductor, like a bare wire attached to a boathook that simultaneously makes contact with the boat itself. Wood boats and fiberglass boats will conduct the charges away at these high voltages.

Depending upon the reason for the operation, the helicopter crew may send down any of a number of things. Whether it’s a pump for dewatering your sinking boat, or a Stokes stretcher to take off an ill or injured passenger, you’ll need to pay attention to the helo crew’s instructions, unhook the item from the lowering cable, and do it carefully and yet as speedily as possible. If you have to work with a victim and basket, the helicopter will move off until you signal that you are ready for pick-up. Just remember, you should never attach anything to the boat that also is attached to the helicopter.

If your style of recreational boating ever could result in the need of a rescue helicopter, then you will benefit by knowing what to expect, and by following these few simple rules. By being a calm, educated, and prepared skipper, you’ll be of great assistance to the skilled pilot and crew that may be risking their own lives on your behalf.