A Skier is a Man Overboard 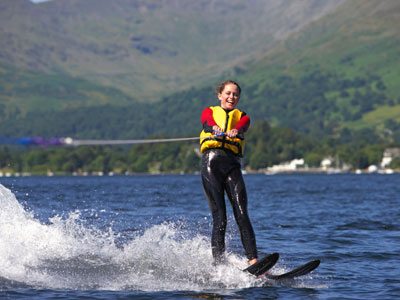 By my definition, when you’re skimming across the surface of the water with one or both of your feet attached to a curved sheet of wood or fiberglass, you’re a “man-overboard.” Okay, maybe you think a M.O.B. has to be someone who fell out of or off of a boat. But the way I see it, anybody that started out in the boat, and is now outside the boat but still on or in the water, is a man-overboard.

Falling out of a boat is not fun, and can be extremely dangerous. It’s usually a surprise to everyone concerned, it’s unintended, sometimes you’re not dressed for it, and it creates considerable stress on you and on the crew and passengers remaining on board. These same conditions, I admit, are not present in the case of water-skiing. The entry into the water is planned and expected, you are dressed for the occasion, and although the departure from the boat may create some element of excitement, there is little stress connected with it. But there shouldn’t be any doubt that from the moment that water-skier is disconnected from the boat, to the time they are safely aboard again, he or she faces the same risks as if that person had tumbled backward over the gunwale on a tight turn. And further, they demand the same attention and safety considerations as if they had fallen overboard.

For example, if a person falls out of your boat, a proper man-overboard procedure dictates that someone on board will keep a sharp eye on them for the duration of the time they’re in the water. Coincidentally, the same procedure applies in the case of a water-skier. Someone aboard must be assigned to watch them every moment they are not in that boat. In most states, it’s the law!

Similarly, in a man-overboard situation, the helmsman must pay close attention to the relationship of the propeller to the person in the water. The same is true when a water-skier is being circled or retrieved. Usually a M.O.B. or skier is brought into the boat over the stern. That’s where the ladder is usually mounted, and it also happens to be in close proximity to the propeller.

In my younger years, I was a proficient water-skier. I didn’t know how to swim well, but I would ski up and down a long stretch of the Mississippi River wearing a ski belt for flotation and occasionally, no flotation device at all. Once, I had a ski rope wrap around my ankle, and I was dragged under water for several hundred feet before the two young ladies in the boat noticed I had fallen and got tangled up.

I even made an attempt at a story-tall ski jump once, wearing the wrong kind of skis and with an inexperienced boat driver. On my one and only attempt, the ski rope caught on the corner of the jump, throwing me off balance just as I reached the jump. My body bounced across the jump about three times before thankfully flying off the end of the ramp and into space. As young people do, I healed quickly and was back on the river within hours attempting more feats of ignorance, like putting the ski handle over my head and behind my neck, or playing “chicken” with a swaying buoy.

The odds were against me surviving my youth unscathed, but I did. Others were not so lucky. One of my close friends ended his high school track and field career when a propeller climbed up his thigh. Another misjudged the swing radius of a fast turn, and his shin gave way to a wood dock at about 60 mph.

None of those water-ski accidents, or any others I’ve ever heard of or read about, involved persons inside the boat. They were all outside the boat, in or on the water, and therefore each was, in my opinion, a man-overboard. In each case, their safety largely was in the hands of the driver of the boat or the designated observer or watchstander, just as would have been the case if they had accidentally fallen over the side.

Every water-skier should know hand signals, equipment care and basic dos and don’ts before they ever jump into the water. But the instant they hit the water, the captain of the boat becomes responsible for the safety of that man-overboard. The captain:

1. Should appoint a competent observer to watch the skier at all times. The observer should know how to interpret hand signals given by the skier, and should be in a position in the boat to relay information to the boat driver quickly and easily.

2. Should make sure the skier is wearing an appropriate PFD, and that the towlines and handles are in good shape.

3. Should maintain a constant speed, and if he or she turns the boat, make certain that the skier has room to swing out to the side safely, far from other boats, moorings, the shoreline and other obstructions.

4. Should not pull his skier through shallow water.

5. Should keep his attention focused ahead, not on the skier behind the boat.

Water ski accidents are rarely the result of actions by the water-skier. The skier is in affect a man-overboard, and as such, deserves the utmost care and attention for as long as they are outside the relatively safe confines of the boat.